What is an OTA Update?

An OTA update is essentially data that is sent and applied wirelessly to a remote device. It was popularized when the first cellular data networks for mobile devices came onto the market 25 years ago. Today, OTA data transfer updates are also being applied to firmware and software on embedded Linux and other IoT devices in use today.

In this post, we discuss why traditionally it’s challenging to update embedded devices and why we need modern cloud technology like containers adapted for embedded to remotely update embedded Linux devices continuously whenever needed. We will also run through a tutorial with an accompanying video describing how Pantacor Fleet updates software and firmware OTA.

When you are updating embedded firmware, embedded devices run the risk of being “bricked” if there is a problem during the update. Bricking means exactly what it sounds like, a next to useless device that may require an expensive trip from the technician to get it working again.

To avoid bricking devices, OTA systems need to be able to mitigate any of the following problems while deploying updates:

To manage the above situations and to maintain the extreme resilience that many of these devices require, OTA deployment systems must be able to always return the device software and firmware to a ‘good state’.

Updating embedded Linux has not always been straight forward. Besides the above situations that can interfere with an update, there is also the problem of how software is built by most embedded teams.  Usually when an update is required, developers must update a package or an app and then rebuild the entire monolith before deploying it to the embedded Linux devices.

But with a containerized approach software stacks are more easily managed as components. By containers, we mean containers that meet an open standard yet are designed specifically for embedded Linux devices that typically run on low specs with minimal resources.  The majority of embedded Linux devices that make up the Internet of Things cannot run Docker Engine since it is very resource intensive.

Instead of running the container manager on top of the Host OS, Pantavisor runs in the init_user_namespace, lower in the stack where it can spin up and manage containers at initial boot time. With this kind of set up, you can then run the Host OS in containers in the userland. Running the Host OS in containers split into specific functions in userland makes your system modular and also simplifies updates. With a componentized embedded system, it also means you don’t have to rebuild the monolith each time and you can update individual components.

In this next section, we’ll show you how to do updates to a containerized app managed with Pantavisor. In this case, we’ll upgrade Tailscale, the zero config VPN gateway and firewall rules manager for secure networks anywhere.

This example assumes that you have already downloaded and installed Pantavisor on your Raspberry Pi, installed the pvr command line utilities and have the tailscale app running in a container on your app. Follow the steps in Part 1 –Create a VPN Gateway with Tailscale and Pantavisor on a Raspberry Pi 3 before continuing.

Part 1 of this tutorial is a written blog that goes over the basics of Pantavisor using Tailscale as an example. The links below are to individual videos describing each step:

Part 2 – Goes into a more depth in the blog and describes how to manage a fleet of devices with Pantacor Fleet. Here are the links to the videos if you prefer those:

Briefly to get Pantavisor and Tailscale on your device and running in Pantacor Hub follow these steps:

If you completed Part 1 of this tutorial and Part 2 your Raspberry Pi will be running in the dashboard in a fleet channel.

We will update the app using the PVR command line utilities. It updates a single container. If you completed the two parts of the tutorial above, you can also apply the update to a channel that can contain millions of devices. 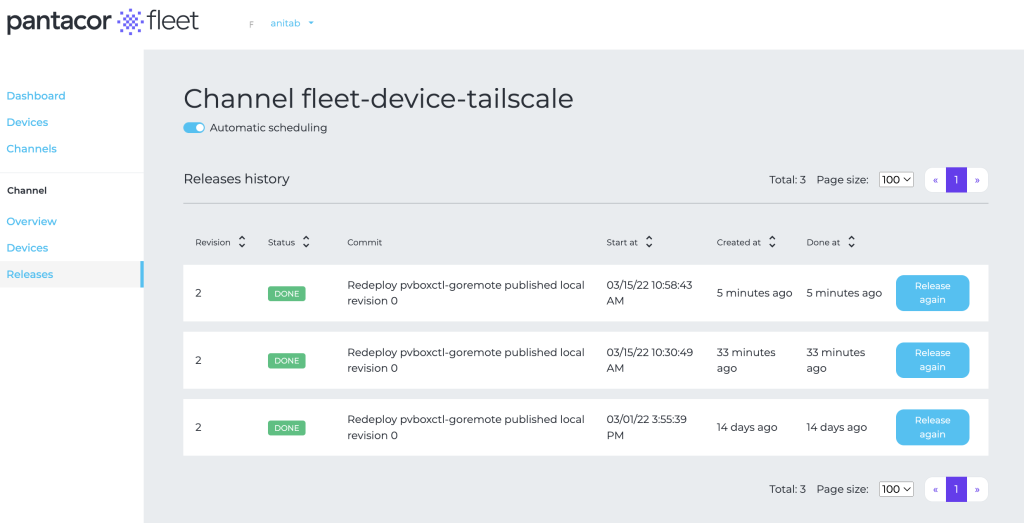 In this post we described how updates are done on a transactional basis on an embedded Linux device containerized and managed with Pantavisor. An important aspect with Pantavisor is that it mitigates any potential deployment failures with the ability to rollback or roll forward, since a “good device state” is always maintained in a repository. The state repository is viewed from Pantacor Hub and Fleet and managed with the PVR command line utilities. In addition, Pantacor Fleet enables teams to manage millions of devices over the air from a single dashboard.

For more information see What is Pantacor?